Artistic expression that is inventive and original is a rare quality. It’s an intangible eccentricity shared by some of the most iconic names in history – Prince, Madonna, Frida Kahlo, Tim Burton – the list goes on. Mark Kauffman is one of those immensely talented individuals that stretches the boundaries of the imagination and invites us to reframe our perspective around the shades of grey between black and white, right and wrong, good and bad. He’s a man who embodies the renegade spirit of creativity – a genuine and inspirational rogue. As the writer of Rogue Matter’s original graphic novel, Making Markum, we wanted to find out more about the man behind the story.

Created in the same vein as The Punisher and John Wick, Making Markum will satisfy your itch for rule-breaking, Italian crime bosses, and a protagonist with questionable morals. Think of our hitman anti-hero, Markum, as the boogeyman of the criminal underground. Most people think he’s just a myth, yet they all pray that their name never finds its way onto his ledger. Markum is a ghost, moving in the distance and the shadows, nobody has ever seen his face. If they have, they either didn’t know who they were seeing or they were dead within the minute. Semi-retired and a sloppy shell of his former self, he’s got a truckload of baggage and a permanent dark cloud over his head.

Ready to dive in? Kelly Kantrowitz sat down with Mark to pick his brain and talk about the graphic novel’s upcoming release.

Kelly: Do you feel like living in Seattle has had any type of impact on your creativity?

Mark: What I’ve found is that – I don’t know if this is how you work – but it takes me a while to work out all the intricacies of a story. I like to go out for long walks. I like having these things percolating on the back burner. It’s like putting a puzzle together and you’re trying to make the puzzle pieces fit together – in terms of character arcs and story structure, whoever the antagonist is – and you’re toying with the idea of just smashing the thing – but then you find the piece that finally fits in. It’s like when you have a sneeze coming on – the build up is frustrating, but the release is gratifying.

Kelly: You were a creative executive for studios like Warner Bros and Paramount. I’d love to hear about your experience working for traditional Hollywood studios and how it compares to what we’re trying to achieve here at Rogue Matter?

Mark: Completely different in that, as I’m sure you know, the way Hollywood was traditionally structured in terms of writers trying to break in – there were a series of locked doors and barriers you would have to navigate. You can’t just send your work to whoever. I mean you can, but when you send it to someone like Warner Bros, they’re just gonna send it back with a note saying, “We will not accept unsolicited submissions.” Unless you have a rep – you’ll have a great deal of trouble getting a submission through.

That’s what’s cool about what Rogue Matter is doing – giving people the opportunity to submit original work straight to a studio that could potentially transform your idea into a reality. I think it’s really cool, there’s such a huge market for it – people love to write various kinds of fanfiction. How many people out there have written their own Star Wars universe-based fanfiction? Marvel or DC Universe? Those types of ideas. To be given the opportunity to potentially take characters you really like and speak to you and craft your own story seems like a wonderful opportunity to run with it. It reminds me of The New Yorker and their cartoons – whoever can come up with the most interesting caption gets featured…it seems very cool.

Kelly: How do you balance your professional day job with your creative side?

Mark: I tend to work on that stuff when I’m outside, because the process for me is a lot more about working out plot points or character arcs and then getting them on the page is the easier part. I’ve kinda got everything lined up in my head. I tend to work on those things outside when I’m doing another activity that doesn’t require a lot of process. It opens up a different part of my mind that allows more of a creative pursuit. 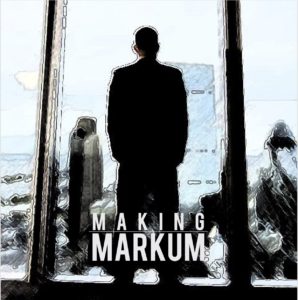 Kelly: I love the edgy, dark, gritty nature of Making Markum, can you tell me more about the story?

Mark: It’s a story about somebody who has a brokenness inside of them that they don’t realize is there. They’re always trying to find a way to compartmentalize it and look past it. There’s a duality in the brokenness inside of the main character. He’s really good at killing people and is naturally talented at it. It’s kind of really sad in some ways and it can potentially further damage him. It’s sort of gratifying because he’s really good at it. I think we all have different natural talents and his happens to be killing.

It’s exploring the – there’s a hollowness there – these things just don’t seem to weigh on him. I think that’s where the character has a lot of room for exploration. Over time, what will transpire from all of this? And is there still an opportunity for redemption? There’s a relatable quality here – unlike Superman – people have a hard time relating to that. We all have this conflict inside of us in terms of our morality and conscience versus our basic instincts. Markum gives into these instincts because he has a talent for these things. We’ll have to see if there’s a goodness that comes out of it.

Mark: At least on the surface, what he’s doing is colder and calculating. With John Wick or the Punisher – there’s an obvious connection in terms of the motivation behind their actions. We’re coming to Markum at a much earlier point in his character arc – before an epiphany that may lead him in a different direction. The seeds are there. We’ve sown the seeds where’s a redemptive quality to him. He is vocally denying that he’s doing any of these things out of friendship or personal obligation. There’s definitely a take that would suggest otherwise. He’s hanging in the balance and it could go either way. The difference between the hero and villain is sometimes just a matter of perspective.

Kelly: Markum is a hitman and not the typical hero – why is it important to show the grey area of a protagonist?

Mark: I think it’s because it makes the protagonist more relatable and grounded. A shallow, one-note character lacks depth and the ability for people to relate on an emotional level. There’s a grey area between the line of right and wrong. If you look at the punisher, for example, I always thought there was a culpability, there’s such a reliance on the justice system, why can’t you see there’s failings here? The punisher is a good example of that.

Kelly: Did you face any challenges during the creative process & piecing Markum’s story together?

Mark: There’s a challenge around writing a character that is inherently dark, because my instinct is to find that redemptive quality (and rush to it much quicker than what’s in the best interests of the character in the story). There are conversations I’ve had with Rogue Matter – it’s hard for me because I’ve been sitting with this character for a long time – you want to see that character be redeemed and you’re always looking for that opportunity or silver lining. That struggle and journey is what’s interesting and engaging to read/watch – and ultimately pulls the audience in. Everyone’s waiting to see if the coin is going to land heads or tails.

Kelly: Are there any plotlines or scenes that didn’t make the final cut of the story?

Mark: Yes. We were gonna have his father make a brief appearance and we had talked about expanding that and having more material (because we have a good idea of his backstory and childhood and his relationships with his parents). We alluded to that in the story with the brief encounter – even that from an audience standpoint has a profound impact. There wasn’t enough space for that backstory in this. But it does a good job of informing Markum’s emotional state.

Stay tuned for more from Mark, who currently working on another project called Roman’s Rise with us!